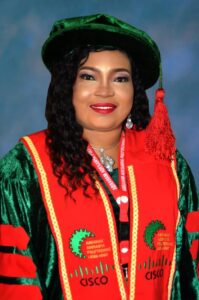 Professor Jumoke Bukunola Bilesanmi-Awoderu was born on 21st December, 1962 to the family of Chief L.A Ogunyinka and Hon. Chief (Mrs) M.I Ogunyinka (JP) in Ilusin, Ogun Waterside Local Government Area of Ogun State. She is the first child of a family of seven children. Her Father is a retired School Principal while her Mother is a retired School Headmistress. She attended Local Authority Primary School in Ilusin from 1968-1973 and Ilusin Grammar School, Ilusin from 1973-1978. She was also in Muslim College, Ijebu-Ode from 1978-1979.

Professor Jumoke Bukunola Bilesanmi-Awoderu FISMN (JP) started her professional training from Ogun State College of Education, Ijebu-ode (now Tai Solarin College of Education, Omu-Ijebu), from 1979 to 1982. She also attended Ogun State University (now Olabisi Onabanjo University), Ago-iwoye, from 1987 to 1990 where she bagged her B.Sc. Education/Biology. She later proceeded to University of Ibadan from 1991 to 1992 where she bagged her M.Ed. Curriculum Studies/Science Education and Ph.D. Curriculum Studies/Science Education in the same University in 1999.

Professor Bilesanmi-Awoderu joined Ogun State University (OSU), now Olabisi Onabanjo University (OOU), Ago-Iwoye, in 1990 as a Graduate Assistant and rose through the ranks to become a Professor of Science Education in 2007 through a dint of hard work. At OOU, she taught various courses both at Undergraduate and Postgraduate levels in the area of Curriculum Studies and Science Education. Her academic excellence could be attested to by over 70 publications to her credit featuring in reputable national and international journals and other outlets. She has  also co-authored a Standard Science Education textbook.

She has attended and participated fully in several local, national and international seminars, workshops and conferences. Professor Bilesanmi–Awoderu has also supervised many students both at Undergraduate and Postgraduate levels (PGDE, M-Ed & Ph.D).

Professor Bilesanmi-Awoderu is the former Rector of Abraham Adesanya Polytechnic, Ijebu-igbo, Ogun state having successfully served a two term tenure of eight years. Prior to her appointment as Rector, Abraham Adesanya Polytechnic, Ijebu-igbo in July 2014, she was the Dean, Faculty of Education, Olabisi Onabanjo University (2012 – 2014). She has also served the University in various capacities which included Head, Department of Curriculum Studies and Instructional Technology, Deputy Director, Centre for Sandwich Programmes and Chairperson of many University, Faculty and Departmental Committees.

Internationally, she was an External Examiner and Doctoral Assessor at the University of the West Indies, Cave-Hill Campus, Barbados.

She is a member of many professional bodies such as Gender and Science and Technology (GASAT) Association, National Association of Women Academics (NAWACS), Science Teachers Association of Nigeria (STAN), Teachers Registration Council of Nigeria (TRCN) and a fellow of The Institute of Strategic Management Nigeria (FISMN).

Prof. Bilesanmi-Awoderu has travelled far and wide. She is currently the Iyalode of Ilusin land and the Iya Ijo elect of St. Mary’s Anglican Church, Olojumeta both in Ogun Water-side.

She is a Widow blessed with loving and successful children making waves in their various professional callings. God has further crowned her blessings with lovely grandchildren.

To God Alone Be The Glory!!!